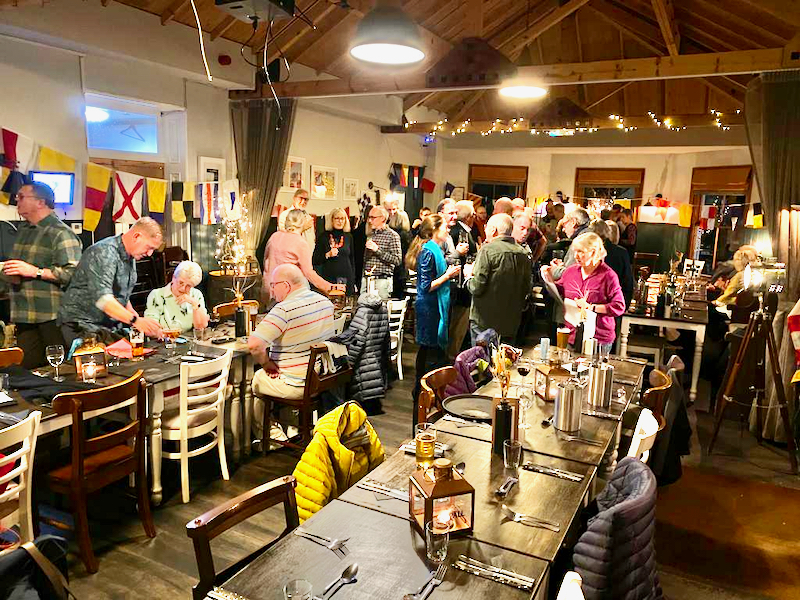 After the challenges of the pandemic, I'm not taking anything for granted when it comes to getting together with friends and neither, it seems, are fellow EACCers.  Over 50 people gathered at Thurne Lion for the Laying Up Supper to reflect on another year in the life of our great club, to celebrate sailing adventures both competitive and more leisurely and to share friendships, old and new.

The Lion always looks lovely 'dressed overall', with our flags creating a suitably nautical welcoming atmosphere and making it very clear who we are and why we are there. This sense of identity, and its welcome continuity, was delightfully enhanced this year by a display of memorabilia from the early days of EACC.  Re-found by Liz and Hilary, there were membership books going back as far as the 1930s, Minutes of meetings from when EACC was based in Great Yarmouth and, amusingly, formal menus from previous Laying Up Suppers where six courses were served, including a fish course and a sorbet! There was no wine list, but I expect it would have been a Liebfraumilch or perhaps a red LaVista - the wine offering of the 1970s from Colmans of Norwich, which was rehydrated locally from imported wine powder. The Lion could do us a six-course retro dinner if we fancied it, but we would absolutely have to draw the line at the authentic wine.  If you didn't get the chance to look at the documents, don't worry as they will be catalogued and put into an on-line archive in due course, but this may take some time as we've only just recruited a club historian - thank you, Sally Ann Bennett.

The Laying Up Supper marks the end of our fundraising year, and we were delighted to raise £267.57 on the evening for the Nancy Oldfield Trust.  The winners of the raffle were Bob and Julia Neate who received a voucher for a meal for two generously donated by Thurne Lion, Phil and Liz Ollier who received a box of quality wine (most definitely not a wine box!) and Tom Moore who took the pink Prosecco. Thanks to all who contributed by either making a donation or offering a raffle prize. 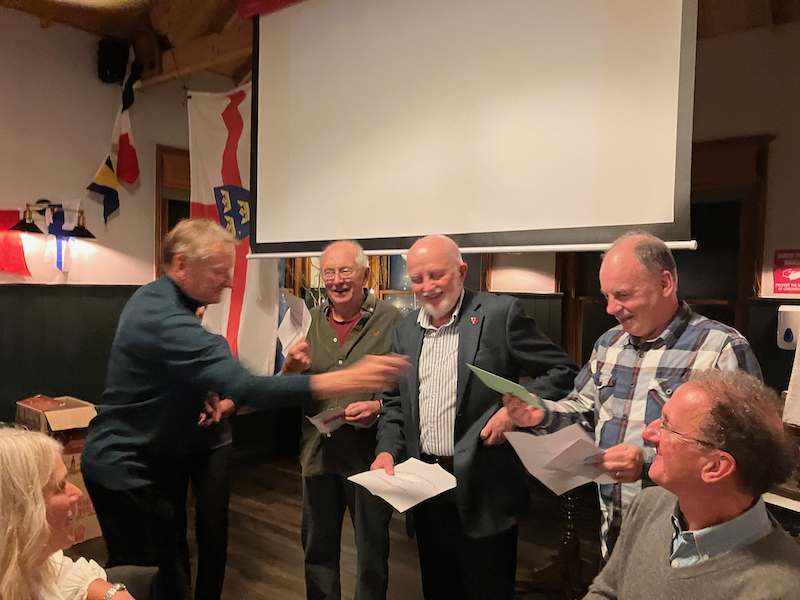 The highlight of the event is always the Skipper's review of the season and the prize-giving.  We were treated to plenty of photos from events of the long, dry summer and the long, rain-threatened TMOR as well as the long, choice-laden Southern Rivers Cruise, which - ** NEW for 2023** - will become an early summer cruise to take advantage of the quieter rivers and moorings before the school holidays start. The winners of the prizes awarded can be found here.   Ian Stewart was the recipient of the Ribs of Beef trophy in 2021. 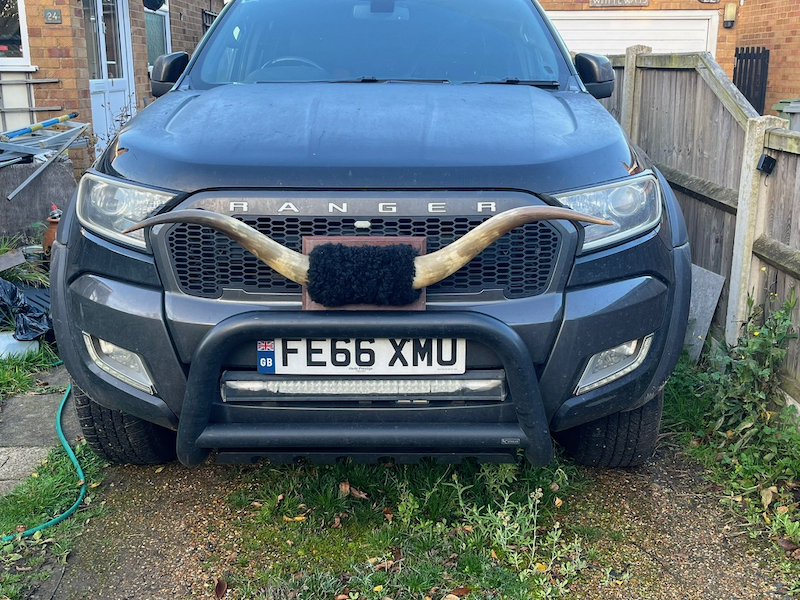 He has provided us with a photo of it adorning his truck, which I suspect was taken near Marshland St James, and all I can say is we're just glad there is nothing on it linking it to EACC!  This year's lucky recipient was John Holmes, who won it for confusing his car with a boat and ending up with a large engine repair bill.  He took quite a haul of silverware this one will certainly have a place somewhere in his trophy cabinet.

It was a great evening and lovely to see so many of you.  Have a good winter, keep in touch through the various social event planned and we will see you on the other side. 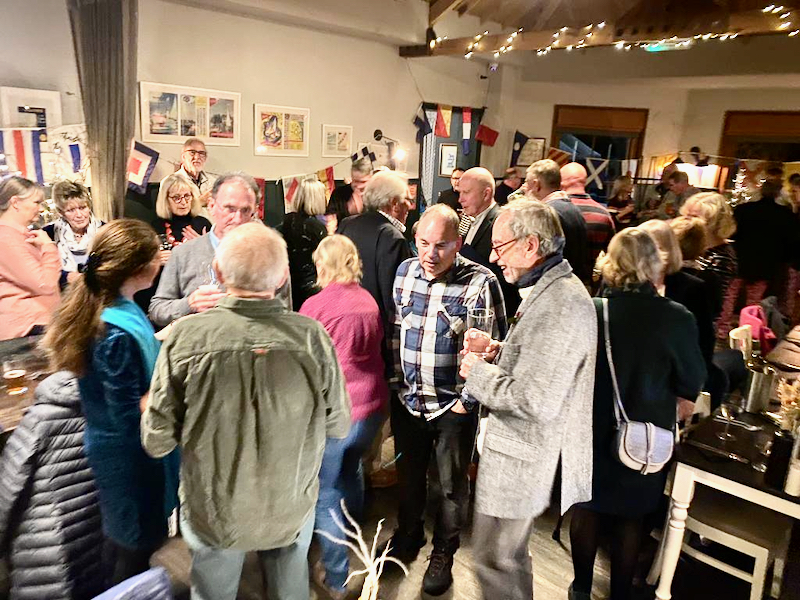 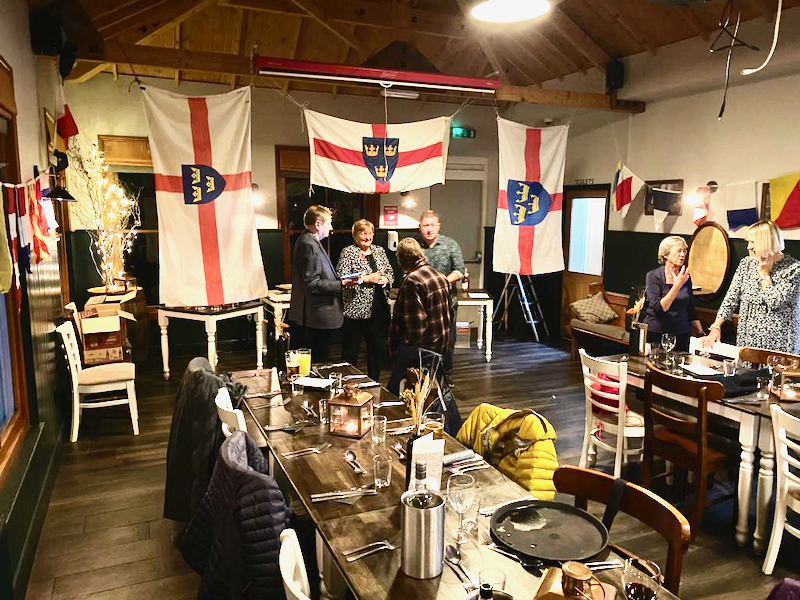 21 boats took part in the three Club Regattas over the season. Only eight boats qualified for the Bradnock Trophy by competing in 5 of the 7 possible races. There was a tie for second place with Adrian Lincoln in Tinkerbell and Hilary Franzen in Martlet both scoring 13.75 points. By counting the next highest race result for each, Tinkerbell’s 5th and Martlet’s 6th, Tinkerbell would be 2nd and Martlet 3rd. The clear overall winner with just 9.5 points is John Holmes in Sabrina II. His crew Jimmy Wells wins the Crew’s Trophy.

N.B. The results used from the Summer Regatta Roundabout Race are those of boats sailed by their normal helms competing against other boats with their normal helms, or, in the case of joint helms both competing, the helm nominated on entry to count.  In the Summer Regatta results on the website these are shown in red. This has been the practice in recent years but the committee intend looking again at the Bradnock rules for next year, particularly in relation to the Roundabout because of helms owning more than one boat and an increasing number of joint owners with more than one helm regularly competing. 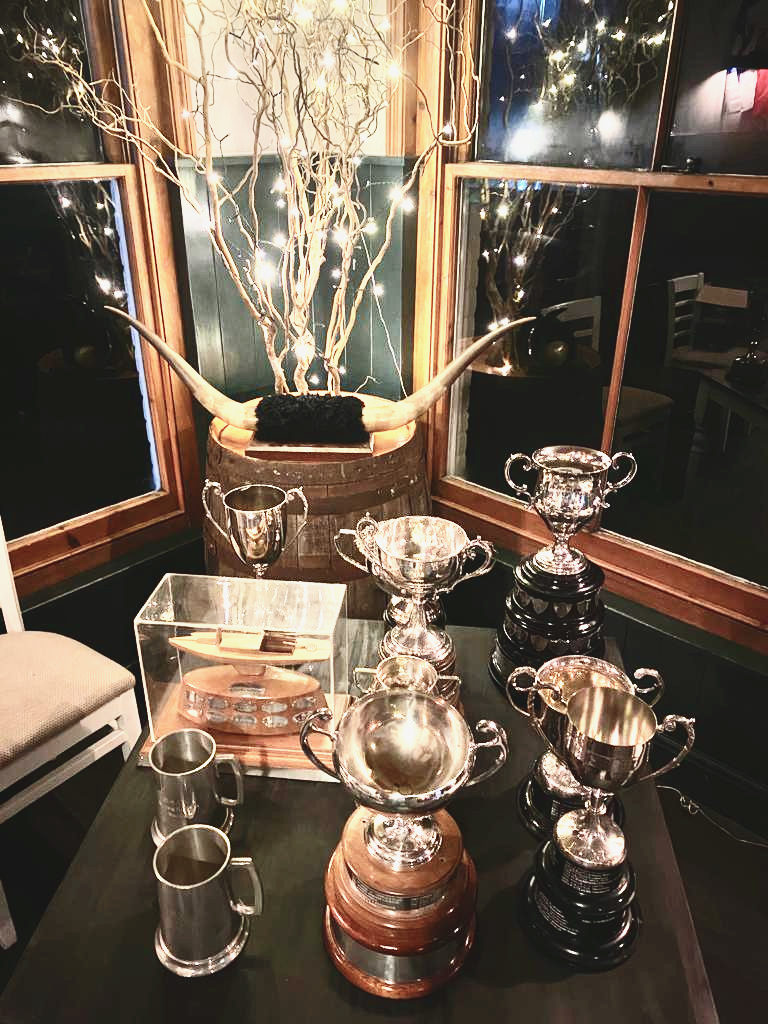